There is no ads to display, Please add some

The Jewish Book Festival invites you to hear author Jack Fairweather unfold the dramatic, untold story of one of the greatest heroes of World War II.
In the Summer of 1940, Witold Pilecki launched his desperately mission to investigate the fate of thousands who had been interred at what the Nazi’s referred to as a new “detention” camp. His mission was to report on the terrible conditions and notorious crimes being committed on the border of Poland and Nazi Germany — but he went on to raise a secret army and plan a prisoner uprising to liberate Auschwitz. He assumed a fake identity, intentionally get captured and sent to the new camp, and then reported back on what had happened to his compatriots there. But gathering information was not his only task: he was to execute an attack from inside—where the Germans would least expect it.  Now, with exclusive access to previously hidden diaries, family and camp survivor accounts, and recently declassified files, Jack Fairweather offers an unflinching portrayal of survival, revenge and betrayal in mankind’s darkest hour.

About Jack Fairweather
Jack Fairweather is a former war reporter in Iraq and Afghanistan and the author of A War of Choice and The Good War. He has served as the Daily Telegraph’s Baghdad bureau chief, and as a video journalist for the Washington Post in Afghanistan. His war coverage has won a British Press Award and an Overseas Press Club award citation. 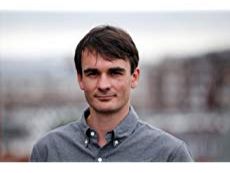